When Apache Kudu was first released in September 2016, it didn’t support any kind of authorization. Anyone who could access the cluster could do anything they wanted. To remedy this, coarse-grained authorization was added along with authentication in Kudu 1.3.0. This meant allowing only certain users to access Kudu, but those who were allowed access could still do whatever they wanted. The only way to achieve finer-grained access control was to limit access to Apache Impala where access control could be enforced by fine-grained policies in Apache Sentry. This method limited how Kudu could be accessed, so we saw a need to implement fine-grained access control in a way that wouldn’t limit access to Impala only.

Kudu 1.10.0 integrated with Apache Sentry to enable finer-grained authorization policies. This integration was rather short-lived as it was deprecated in Kudu 1.12.0 and will be completely removed in Kudu 1.13.0.

Most recently, since 1.12.0 Kudu supports fine-grained authorization by integrating with Apache Ranger 2.1 and later. In this post, we’ll cover how this works and how to set it up.

Ranger supports a wide range of software across the Apache Hadoop ecosystem, but unlike Sentry, it doesn’t depend on any of them for fine-grained authorization, making it an ideal choice for Kudu.

Ranger consists of an Admin server that has a web UI and a REST API where admins can create policies. The policies are stored in a database (supported database systems are Microsoft SQL Server, MySQL, Oracle, PostgreSQL, and SQL Anywhere) and are periodically fetched and cached by the Ranger plugin that runs on the Kudu Masters. The Ranger plugin is responsible for authorizing the requests against the cached policies. At the time of writing this post, the Ranger plugin base is available only in Java, as most Hadoop ecosystem projects, including Ranger, are written in Java.

Unlike Sentry’s client which we reimplemented in C++, the Ranger plugin is a fat client that handles the evaluation of the policies (which are much richer and more complex than Sentry policies) locally, so we decided not to reimplement it in C++.

Each Kudu Master spawns a JVM child process that is effectively a wrapper around the Ranger plugin and communicates with it via named pipes.

This post assumes the Admin Tool of a compatible Ranger version is installed on a host that is reachable by both you and by all Kudu Master servers.

Note: At the time of writing this post, Ranger 2.0 is the most recent release which does NOT support Kudu yet. Ranger 2.1 will be the first version that supports Kudu. If you wish to use Kudu with Ranger before this is released, you either need to build Ranger from the master branch or use a distribution that has already backported the relevant bits (RANGER-2684: 0b23df7801062cc7836f2e162e1775101898add4).

To enable Ranger integration in Kudu, Java 8 or later has to be available on the Master servers.

You can build the Ranger subprocess by navigating to the java/ inside the Kudu source directory, then running the below command:

This will build the subprocess JAR which you can find in the kudu-subprocess/build/libs directory.

Setting up Kudu with Ranger

The first step is to add Kudu in Ranger Admin and set tag.download.auth.users and policy.download.auth.users to the user or service principal name running the Kudu process (typically kudu). The former is for downloading tag-based policies which Kudu doesn’t currently support, so this is only for forward compatibility and can be safely omitted. 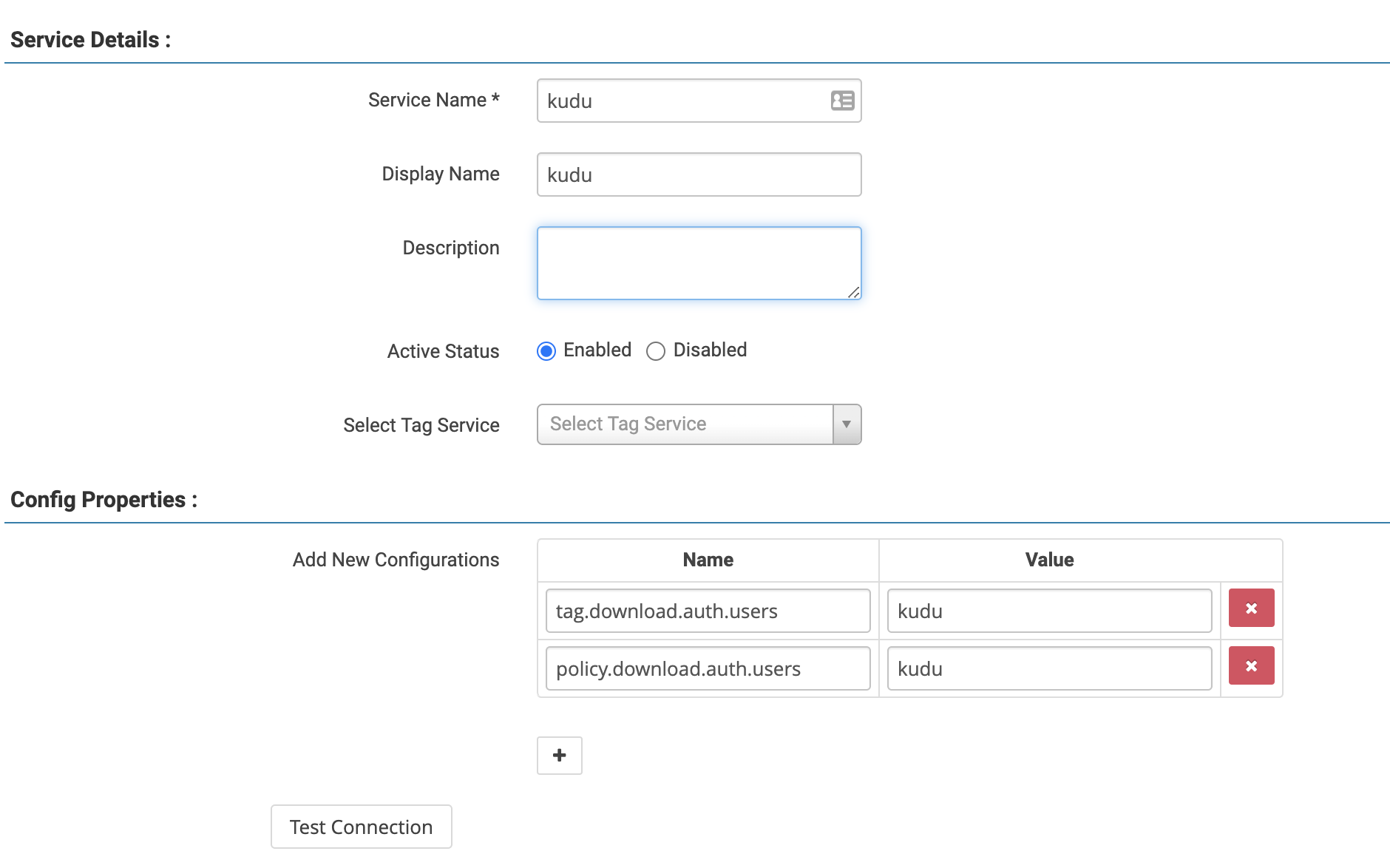 Next, you’ll have to configure the Ranger plugin. As it’s written in Java and is part of the Hadoop ecosystem, it expects to find a core-site.xml in its classpath that at a minimum configures the authentication types (simple or Kerberos) and the group mapping. If your Kudu is co-located with a Hadoop cluster, you can simply use your Hadoop’s core-site.xml and it should work. Otherwise, you can use the below sample core-site.xml assuming you have Kerberos enabled and shell-based groups mapping works for you:

In addition to the core-site.xml file, you’ll also need a ranger-kudu-security.xml in the same directory that looks like this:

Note: This is a minimal config. For more options refer to the Ranger documentation

Once these files are created, you need to point Kudu Masters to the directory containing them with the -ranger_config_path flag. In addition, -ranger_jar_path and -ranger_java_path should be configured. The Java path defaults to $JAVA_HOME/bin/java if $JAVA_HOME is set and falls back to java in $PATH if not. The JAR path defaults to kudu-subprocess.jar in the directory containing the kudu-master binary.

As the last step, you need to set -tserver_enforce_access_control to true on the Tablet Servers to make sure access control is respected across the cluster.

After setting up the integration it’s time to create some policies, as now only trusted users are allowed to perform any action, everyone else is locked out.

To create your first policy, log in to Ranger Admin, click on the Kudu service you created in the first step of setup, then on the “Add New Policy” button in the top right corner. You’ll need to name the policy and set the resource it will apply to. Kudu doesn’t support databases, but with Ranger integration enabled, it will treat the part of the table name before the first period as the database name, or default to “default” if the table name doesn’t contain a period (configurable with the -ranger_default_database flag on the kudu-master). 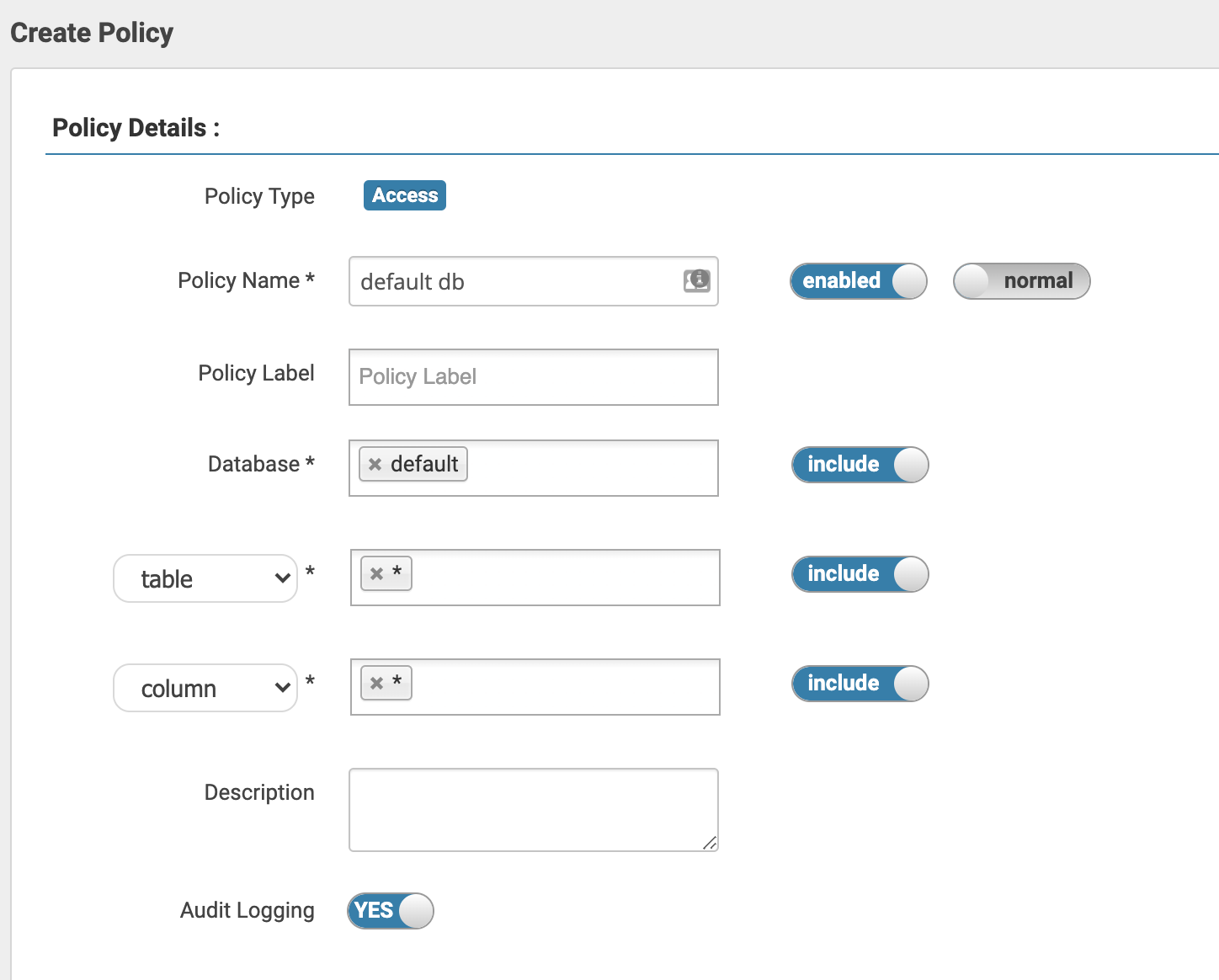 For a list of the required privileges to perform operations please refer to our documentation.

Kudu 1.13 will introduce table ownership, which enhances the authorization experience when Ranger integration is enabled. Tables are automatically owned by the users creating the table and it’s possible to change the owner as a part of an alter table operation.

Ranger supports granting privileges to the table owners via a special {OWNER} user. You can, for example, grant the ALL privilege and delegate admin (this is required to change the owner of a table) to {OWNER} on db=*->table=*->column=*. This way your users will be able to perform any actions on the tables they created without having to explicitly assign privileges per table. They will, of course, need to be granted the CREATE privilege on db=* or on a specific database to actually be able to create their own tables.

In this post we’ve covered how to set up and use the newest Kudu integration, Apache Ranger, and a sneak peek into the table ownership feature. Please try them out if you have a chance, and let us know what you think on our mailing list or Slack. If you run into any issues, feel free to reach out to us on either platform, or open a bug report.