Note: This is a cross-post from the Cloudera Engineering Blog Transparent Hierarchical Storage Management with Apache Kudu and Impala

When picking a storage option for an application it is common to pick a single storage option which has the most applicable features to your use case. For mutability and real-time analytics workloads you may want to use Apache Kudu, but for massive scalability at a low cost you may want to use HDFS. For that reason, there is a need for a solution that allows you to leverage the best features of multiple storage options. This post describes the sliding window pattern using Apache Impala with data stored in Apache Kudu and Apache HDFS. With this pattern you get all of the benefits of multiple storage layers in a way that is transparent to users.

Apache Kudu is designed for fast analytics on rapidly changing data. Kudu provides a combination of fast inserts/updates and efficient columnar scans to enable multiple real-time analytic workloads across a single storage layer. For that reason, Kudu fits well into a data pipeline as the place to store real-time data that needs to be queryable immediately. Additionally, Kudu supports updating and deleting rows in real-time allowing support for late arriving data and data correction.

Apache HDFS is designed to allow for limitless scalability at a low cost. It is optimized for batch oriented use cases where data is immutable. When paired with the Apache Parquet file format, structured data can be accessed with extremely high throughput and efficiency.

For situations in which the data is small and ever-changing, like dimension tables, it is common to keep all of the data in Kudu. It is even common to keep large tables in Kudu when the data fits within Kudu’s scaling limits and can benefit from Kudu’s unique features. In cases where the data is massive, batch oriented, and unlikely to change, storing the data in HDFS using the Parquet format is preferred. When you need the benefits of both storage layers, the sliding window pattern is a useful solution.

In this pattern, matching Kudu and Parquet formatted HDFS tables are created in Impala. These tables are partitioned by a unit of time based on how frequently the data is moved between the Kudu and HDFS table. It is common to use daily, monthly, or yearly partitions. A unified view is created and a WHERE clause is used to define a boundary that separates which data is read from the Kudu table and which is read from the HDFS table. The defined boundary is important so that you can move data between Kudu and HDFS without exposing duplicate records to the view. Once the data is moved, an atomic ALTER VIEW statement can be used to move the boundary forward.

Note: This pattern works best with somewhat sequential data organized into range partitions, because having a sliding window of time and dropping partitions is very efficient.

Impala also supports cloud storage options such as S3 and ADLS. This capability allows convenient access to a storage system that is remotely managed, accessible from anywhere, and integrated with various cloud-based services. Because this data is remote, queries against S3 data are less performant, making S3 suitable for holding “cold” data that is only queried occasionally. This pattern can be extended to use cloud storage for cold data by creating a third matching table and adding another boundary to the unified view.

Note: For simplicity only Kudu and HDFS are illustrated in the examples below.

The process for moving data from Kudu to HDFS is broken into two phases. The first phase is the data migration, and the second phase is the metadata change. These ongoing steps should be scheduled to run automatically on a regular basis.

In the first phase, the now immutable data is copied from Kudu to HDFS. Even though data is duplicated from Kudu into HDFS, the boundary defined in the view will prevent duplicate data from being shown to users. This step can include any validation and retries as needed to ensure the data offload is successful. 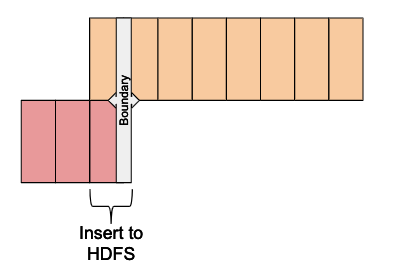 In the second phase, now that the data is safely copied to HDFS, the metadata is changed to adjust how the offloaded partition is exposed. This includes shifting the boundary forward, adding a new Kudu partition for the next period, and dropping the old Kudu partition. 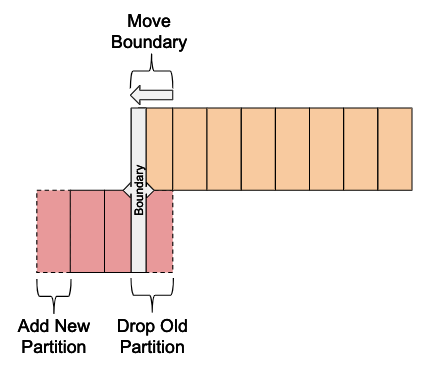 Moving data among storage systems via Impala is straightforward provided you have matching tables defined using each of the storage formats. In order to keep this post brief, all of the options available when creating an Impala table are not described. However, Impala’s CREATE TABLE documentation can be referenced to find the correct syntax for Kudu, HDFS, and cloud storage tables. A few examples are shown further below where the sliding window pattern is illustrated.

Once the tables are created, moving the data is as simple as an INSERT…SELECT statement:

All of the features of the SELECT statement can be used to select the specific data you would like to move.

Note: If moving data to Kudu, an UPSERT INTO statement can be used to handle duplicate keys.

Querying data from multiple tables and data sources in Impala is also straightforward. For the sake of brevity, all of the options available when creating an Impala view are not described. However, see Impala’s CREATE VIEW documentation for more in-depth details.

Creating a view for unified querying is as simple as a CREATE VIEW statement using two SELECT clauses combined with a UNION ALL:

WARNING: Be sure to use UNION ALL and not UNION. The UNION keyword by itself is the same as UNION DISTINCT and can have significant performance impact. More information can be found in the Impala UNION documentation.

All of the features of the SELECT statement can be used to expose the correct data and columns from each of the underlying tables. It is important to use the WHERE clause to pass through and pushdown any predicates that need special handling or transformations. More examples will follow below in the discussion of the sliding window pattern.

Additionally, views can be altered via the ALTER VIEW statement. This is useful when combined with the SELECT statement because it can be used to atomically update what data is being accessed by the view.

Below are sample steps to implement the sliding window pattern using a monthly period with three months of active mutable data. Data older than three months will be offloaded to HDFS using the Parquet format.

First, create a Kudu table which will hold three months of active mutable data. The table is range partitioned by the time column with each range containing one period of data. It is important to have partitions that match the period because dropping Kudu partitions is much more efficient than removing the data via the DELETE clause. The table is also hash partitioned by the other key column to ensure that all of the data is not written to a single partition.

Note: Your schema design should vary based on your data and read/write performance considerations. This example schema is intended for demonstration purposes and not as an “optimal” schema. See the Kudu schema design documentation for more guidance on choosing your schema. For example, you may not need any hash partitioning if your data input rate is low. Alternatively, you may need more hash buckets if your data input rate is very high.

Note: There is an extra month partition to provide a buffer of time for the data to be moved into the immutable table.

Create the matching Parquet formatted HDFS table which will hold the older immutable data. This table is partitioned by year, month, and day for efficient access even though you can’t partition by the time column itself. This is addressed further in the view step below. See Impala’s partitioning documentation for more details.

Now create the unified view which will be used to query all of the data seamlessly:

Each SELECT clause explicitly lists all of the columns to expose. This ensures that the year, month, and day columns that are unique to the Parquet table are not exposed. If needed, it also allows any necessary column or type mapping to be handled.

The initial WHERE clauses applied to both my_table_kudu and my_table_parquet define the boundary between Kudu and HDFS to ensure duplicate data is not read while in the process of offloading data.

The additional AND clauses applied to my_table_parquet are used to ensure good predicate pushdown on the individual year, month, and day columns.

WARNING: As stated earlier, be sure to use UNION ALL and not UNION. The UNION keyword by itself is the same as UNION DISTINCT and can have significant performance impact. More information can be found in the Impala UNION documentation.

Now that the base tables and view are created, prepare the ongoing steps to maintain the sliding window. Because these ongoing steps should be scheduled to run on a regular basis, the examples below are shown using .sql files that take variables which can be passed from your scripts and scheduling tool of choice.

Create the window_data_move.sql file to move the data from the oldest partition to HDFS:

Note: The COMPUTE INCREMENTAL STATS clause is not required but helps Impala to optimize queries.

Note: You can adjust the WHERE clause to match the given period and cadence of your offload. Here the add_months function is used with an argument of -1 to move one month of data in the past from the new boundary time.

Create the window_view_alter.sql file to shift the time boundary forward by altering the unified view:

Create the window_partition_shift.sql file to shift the Kudu partitions forward:

Note: You should periodically run COMPUTE STATS on your Kudu table to ensure Impala’s query performance is optimal.

Now that you have created the tables, view, and scripts to leverage the sliding window pattern, you can experiment with them by inserting data for different time ranges and running the scripts to move the window forward through time.

Insert some sample values into the Kudu table:

Show the data in each table/view:

Move the January data into HDFS:

Confirm the data is in both places, but not duplicated in the view:

Alter the view to shift the time boundary forward to February:

Confirm the data is still in both places, but not duplicated in the view:

Confirm the January data is now only in HDFS: